What do atoms and molecules look like according to Millsian theory?

Recall that in the Bohr model of the atom, the electron orbits the proton in a circular orbit, and the electron is thought to be a point-charge. According to Maxwell’s Equations, a point-charge should radiate as it orbits, losing energy, causing it to collapse into the nucleus within a fraction of a second. Thus, an orbiting point-charge is inherently unstable.

However, unlike a point-charge, an extended distribution of charge may, under certain conditions, accelerate without radiating. Millsian founder Dr. Randell Mills used this nonradiation condition to solve the electron as a spherical shell of charge centered on the nucleus. This is called the atomic orbital, and is analogous to a soap bubble. 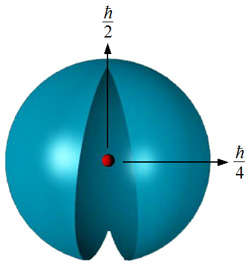 Unlike a rigid spinning sphere, the atomic orbital has a complex pattern of motion on its surface, producing two angular momentum vectors that give rise to the phenomenon of electron spin.

In multi-electron atoms, each additional electron either merges into an existing shell, or forms a new, concentric shell to give an energy minimum. Each shell is an Atomic Orbital (AO), denoted by s, p, d, f, etc. The Maxwellian forces between these shells determines their radii. When electrons combine in a p or higher shell, they form non-uniform charge density distributions on the surface of the shell that are spherical harmonics (in Quantum Mechanics, these are spatial lobes.) 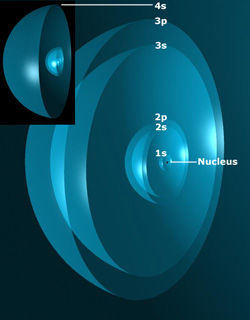 When two hydrogen atoms bond, the electrons stretch over both protons to form a prolate spheroidal shell, called a Molecular Orbital (MO). The charge builds up at the ends of the bond, closer to the nuclei, reducing the total energy of the system. For more complex molecules, the molecular orbital shell can completely surround the atomic orbitals, or bridge between them.

Note that according to Millsian theory, atoms and bonds are made up of discrete surfaces of negative charge, not probability-density clouds. This gives Millsian the ability to render the exact charge distribution profile (see color scale above) for molecules of any size and complexity. Download a trial version of Millsian software to see what we are capable of.

Millsian is based on The Grand Unified Theory of Classical Physics (GUT-CP), which uses classical physics to solve the physical structure of fundamental particles, atoms, and molecules. For more information on the theory, consult the theory presentation, theory papers, or the book by Dr. Randell Mills.